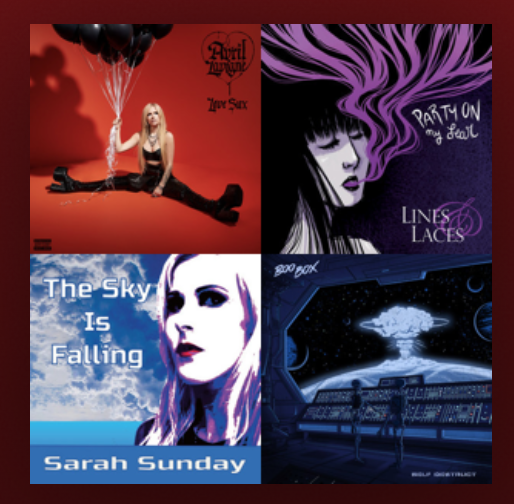 Avril Lavigne’s eagerly awaited new album, Love Sux, is out featuring guest appearances and production work from blackbear, Blink-182’s Travis Barker and Mark Hoppus, her boyfriend Mod Sun, and Machine Gun Kelly . The album packs a powerful punch of energy and brings us right back to the skate-punk aesthetic that made her the princess darling of the pop punk revival.

In April 2007, her third studio album, The Best Damn Thing, was released. It was her second album to debut at number one on the US Billboard 200 chart, it sold 6 million copies worldwide, and has produced Lavigne’s most successful single, “Girlfriend”.

The best album credited to Avril Lavigne is Let Go which is ranked number 1,628 in the overall greatest album chart and shares a similar sound to her new lead single ‘Cannonball’.

We’ve got a new playlist to help you get to know this CANADIAN rocker while you discover indie artists that sit right along side this high energy rock lovers candy store.

Think Blink 182, The Cure, Machine Gun Kelly in the music, and Shakespear’s emo punk step-brother in the lyrics. The lyrics speak to the challenge of seeking bliss and fulfillment amidst an exhausting climb upward.

Lines and Laces Breaks off a Relationship to discover a hollow victory on New Single ‘Better’ . The song is a turning point for our songwriting process. Since we met, we had been writing music together, but everything we did came off more like “campfire songs.”

Sound like: I try to be diverse in music as much as I can. That said, I guess this has some 80s and 90s rock elements in it with the fast driving beat and downturned riff that adds a late 90s feel but with some big harmonies on the chorus.

Downpour is a fast-driving rock track about feeling lost or trapped. The song was written for a loved one who has gone through so much through the years. I see and feel the toll that long-term stress takes on a person. Depression and anxiety can be destructive forces in our lives. How can we overcome it and get out of the rain?

A very unique song with a distinctive, almost hypnotic vibe and a magical mixture of vintage elements going hand in hand with modern songwriting and production. www.avaliveradio.info/featured/electric-enemy-sweet-tooth

We created this song for people who tend to dwell on the negative things so much that it prevents them from moving forward. we made this song for those of us who need an extra push to be our best self. This song came out easily and it defines where we’ve come as song writers. Even though we are twins, we struggled to make a song that we agree on. “Self Destruct” is the sound we’ve been searching for and has the vibe and energy we’ve been for since we started making music.