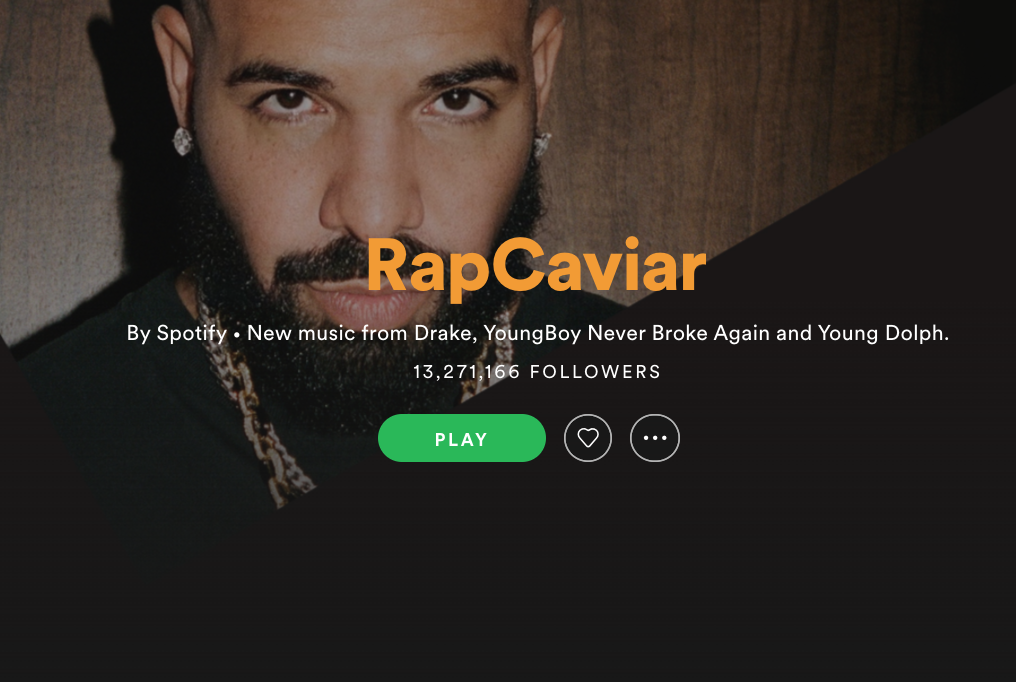 With more than 13 million followers to its credit, Spotify’s foremost hip-hop playlist, RapCaviar, can change the trajectory of both individual tracks and entire careers.

Spotify didn’t know they would stumble upon a goldmine back in 2015 when they rolled out their RapCaviar playlist to showcase a mesh of emerging and superstar MCs, as the trendsetting playlist has become the most sought-after real estate in all of hip-hop. 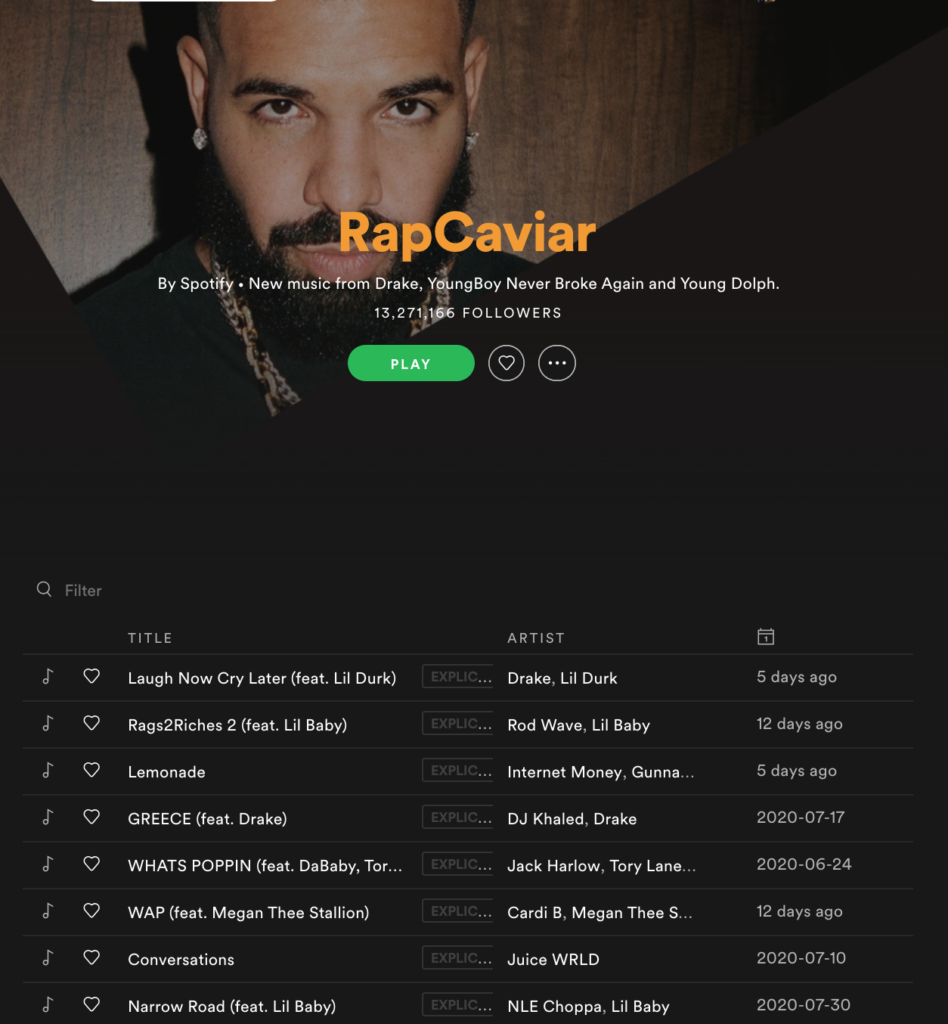 Originally created and run by Tuma Basa, RapCaviar is Spotify’s largest Hip-Hop playlist with a following of over 10 million users.

But which tracks perform best once selected for this famed playlist? 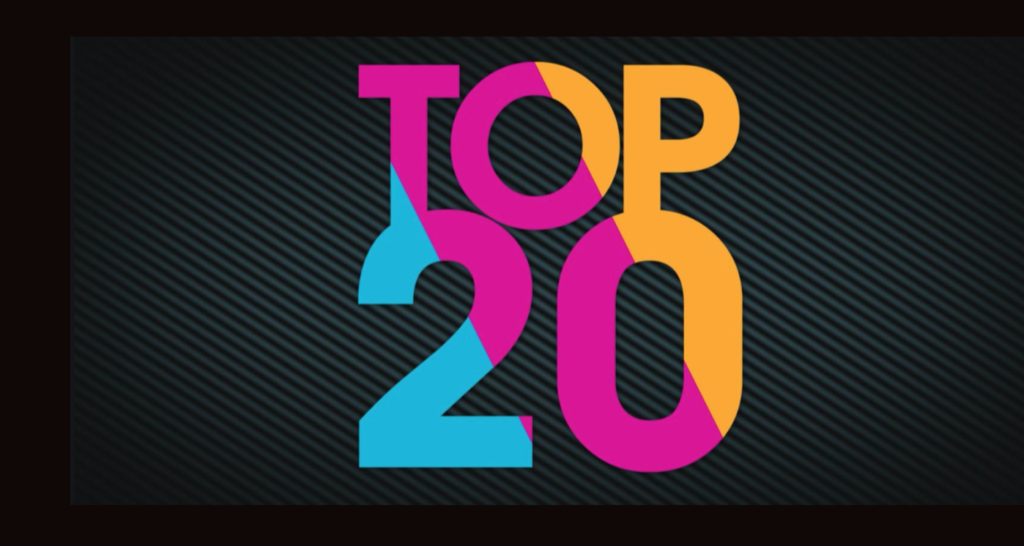 Here’s a list of music you need to know about from the RapCaviar Spotify Playlist history.

Rap luminaries such as Cardi B, Lil Uzi Vert, Drake, Travis Scott and Migos all own mansions on RapCaviar Avenue, but the top five most-streamed songs from the playlist’s history might surprise you:

Noted musicians from this playlist.. 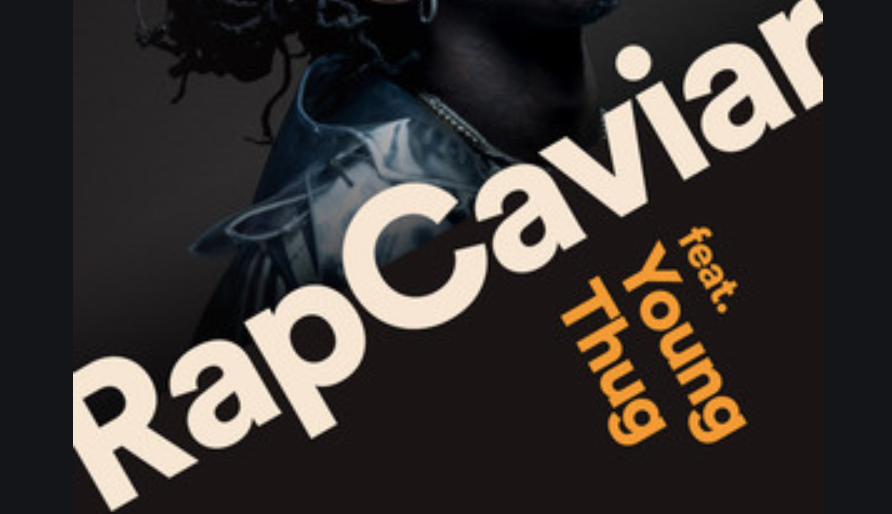 How to Get Your Music on Spotify’s Biggest Playlist: RapCaviar

Follow our plan to become the next Hip Hop sensation.

To get your music featured on Spotify’s Biggest Hip-Hop Playlist RapCaviar you need to go through a trusted and top music promotor like AVA Live Radio.

Today, the playlist is no longer in the hands of Tuma but now is organized by Spotify editorial team members. They select music based on newsworthy singles on the rise. They especially pay attention to uniqueness, creativity, and originality.

For Spotify playlist like Rap Caviar and Release Radar, an artist’s new release is eligible to appear in the playlist up to 28 days after it’s been released.

You can only have one song in Release Radar at a time, so we recommend releasing 1 track every 2-4 weeks per artist instead of a full album of work.

Check out: How to get your music on a top playlist…

Should you pay for music promotions?

Press or public relations, or PR companies, charge for their services, as they should. Paying for this kind of music promotion is proper and a recommended action to take in promoting your work.

You should start with a cost investment you can manage, and go with the most marketing you can afford to do as pro-level packages typically gain the best results when hiring a PR company to do this kind of work. Giving your trusted promotional team a solid budget to work with always pays back to you X5 provided you work with a team that has great feedback and is active in promoting music daily.

How the Spotify Playlist System Works

On Spotify, not all playlists are created equal. The most popular Spotify playlists are extremely competitive and usually owned and curated by either Spotify or a major label. In most cases, you’re going to have to work your way up the ladder. So let’s go through the pyramid one by one.

Spotify-curated playlists are at the top of the pyramid. Some of these playlists are smaller and more niche with tens of thousands of followers.

Then private music curators like AVA Live Radio have niche playlist that can be used to help gain traction on your single and draw attention to your music. This is important because you need a variety of people and playlists noting your work on the spotify system.

While the top Spotify playlists like Rap Caviar, Are & Be, and Today’s Top Hits have upwards of a million followers.

A lot of times, the songs that make it to big Spotify playlists have been tested on the smaller ones. They primarily look at Spotify data like plays, skips, and finishes to decide how well a song is performing. If your song performs well you have a greater chance of getting on playlists and staying on playlists for longer.

It’s also important to note that some Spotify playlists are curated by Spotify playlist curators, while others like Fresh Finds use an algorithm to populate the songs based on each user’s particular tastes.

Next we have the major label-owned playlists. Sony owns Filtr, Warner owns Topsify, and Universal owns Digster. These playlists get a decent amount of real estate on the Spotify browse page and are often used to plug label artists in order to get some plays and hopefully land a spot on a Spotify playlist.

Playlists that are curated by independent spotify playlist curators are important for the quality listeners they can bring to you.

Indie labels, big radio stations, and big-time music bloggers own some playlists. Others might be owned and curated by a popular indie artist with a larger following and music promotors who have marketed their playlists on social media platforms and made a name for listing great music.

Getting your songs on Spotify playlists is going to be a game of working your way up the ladder. Here’s how you can get started and get some qualified help on board.

Start the AVA live Radio promotional team in action to make your song newsworthy and have your song reviewed. Once reviews start coming in and your spotify plays are gaining momentum, your application for Spotify playlists will have a much higher chance of getting selected for their curated lists. Then follow their instructions on how to register your song for the Spotify Curated playlists.

Promote your single on social media as often as possible and focus on getting other people to share your link.

Indie music spin and AVA Live Radio work together using our own social media pages to create back links to your spotify music profile driving traffic directly to your spotify page. More plays on your spotify single, means more music hype for Spotify to notice.

Just like other platforms, Spotify has an algorithm that rewards artists who spend a lot of time on and put a lot of energy into the platform.

The quality needs to be there. If you want your songs to stand next to some of the world’s best tracks on playlists with millions of followers, your song needs to sound the part.

Keep the momentum going for at least 8 weeks on each single while you launch a new quality single every 2-4 weeks. Building on multiple rising music singles alerts Spotify and other music curators to exploding music. It doesn’t take alot of plays to gain attention but we recommend shooting for 100k plays on every single you launch gained over 8 weeks when possible.

Working with a valuable promotion team that is achieving results regularly, is essential to your efforts.

Check out the Top 20 Summer Singles Playlist to see music already on the rise. 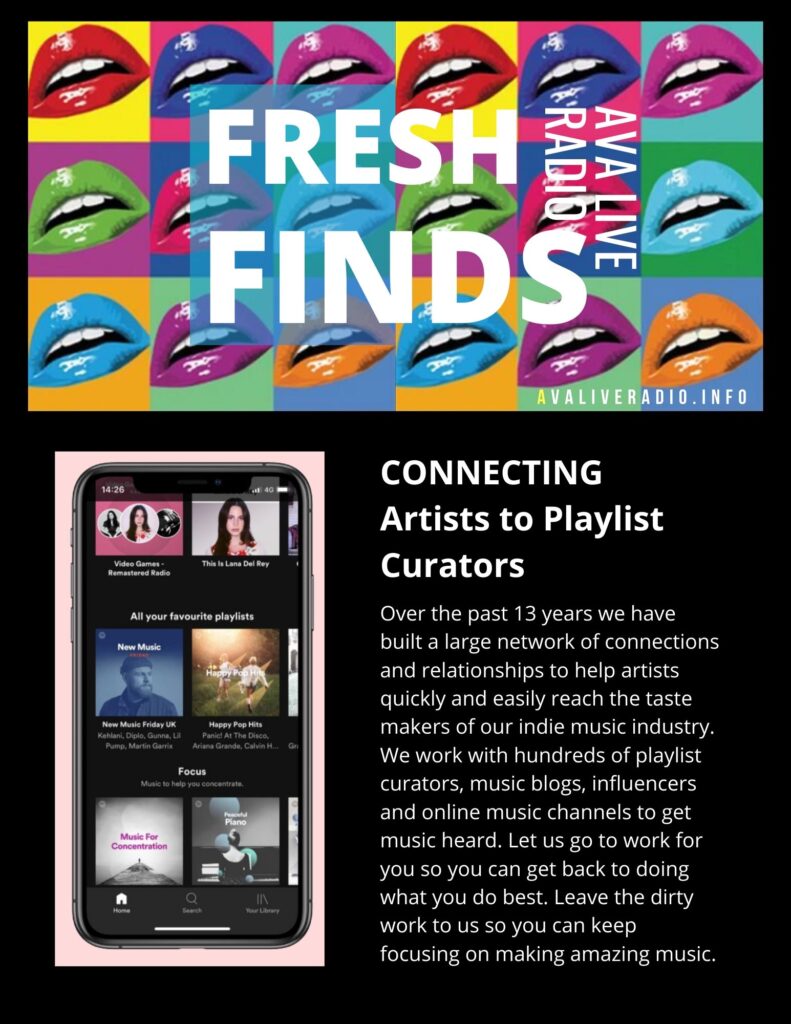