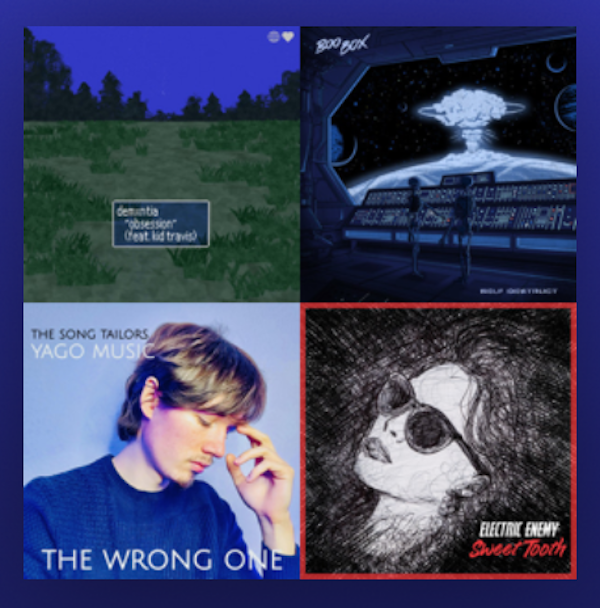 Indie artists who are doing things on their own terms. Check out these amazing new tracks that have just been released and add them to your own playlist.

New Release: The Wrong One

Sounds like: : This track is unique and a new sound for The Song Tailors, further demonstrating Ruth Picker’s songwriting breadth and abilities. It is a new collaboration with artist YAGO Music (Jakob Faber) showcasing his vocal warmth, tone and emotive style as he leads us through a compelling relatable story.

The Song Tailors The Wrong One encourages you to break negative relationship patterns. www.avaliveradio.info/featured/the-song-tailors-the-wrong-one

is a self-taught musician, producer, and singer/songwriter who creates music inspired by artists such as Coldplay, Jack Johnson, and Bruno Mars. In his songs, Javiere talks about his dreams, goals, struggles, and past experiences for his audience to relate to and share positive messages. Known for his energy, the majority of his releases are powered with exciting Rock, Indie, and R&B songs such as the funk-styled Train Wreck as well as some softer songs like I Want To Be that are calmer to listen to and vibe.

Singer-songwriter Francis Skyes was born, Jeremy Francis Dollemont, on the East coast of Canada. He started making music at a young age with his local church and went on to have success in 2015 performing as ‘Islove’, with his song “Goodbye” which charted on billboard top 100 around the world. Francis currently resides in Riverview, New Brunswick where he writes, records, produces all his music from home. Francis is a genre blend of Acoustic/Electronic/Folk with hints of Bon Iver, Shallou, RY X and Rufus Du sol.

‘Be Like You’ by Cabela and Schmitt is a sweet message dedicated to those people in our lives that we love and admire. We cannot live a good life on this earth if we don’t have people like this in our lives.

ncludes playlists already promoting your song, Press and social media.
RW Smith Alcohol Of Fame is an unabashed look at life as we know it

Ending 2021 with CHAOS, this album release features fan-favorite artists like guardin, familypet and Original God supporting indie-rock and electronic influences to allow demxntia to showcase his fluidity. Produced and recorded in 10 days, CHAOS is raw and unfiltered with inspiration from his own personal struggles with ADHD and Depression.

With over 250M+ streams worldwide across numerous platforms, Demxntia’s philosophy of perseverance and his many influences continue to shape his projects.

New Release: Sure Got Cold After the Rain Fell

Sounds like: : ZZ Top (it’s a cover after all!), Kings of Leon, My Morning Jacket, Alabama Shakes, Lynyrd Skynyrd

Greg Hoy and The Boys New Release Sure Got Cold After the Rain Fell: A song slow-burning, deeply moving 1972 classic ‘Sure Got Cold’ is about the pain experienced by loss and yearning after a break up.

Pop Rock single Don’t Let Go by Doctor Lincoln is a song about love and loss and asking for help in the midst of the resultant severe depression.

Located in: : Nebraska and Colorado

‘Among’ by Cabela and Schmitt embraces a new generation of humans

‘Among’ is about an experience we are having in our lives right now. As we grow older we realize that a new generation is in our midst. We love them, embrace them, care for them, and hope their future can be fruitful and bright.

Lyn-Sey’s new release can only be described as sexy, dreamy, and haunting. It has a 70s sound with a modern twist wrapped in a fusion of jazz, R&B, soul, and blues. www.avaliveradio.info/featured/lynsey-new-jazz-fusion-single-youre-gonna-miss-me