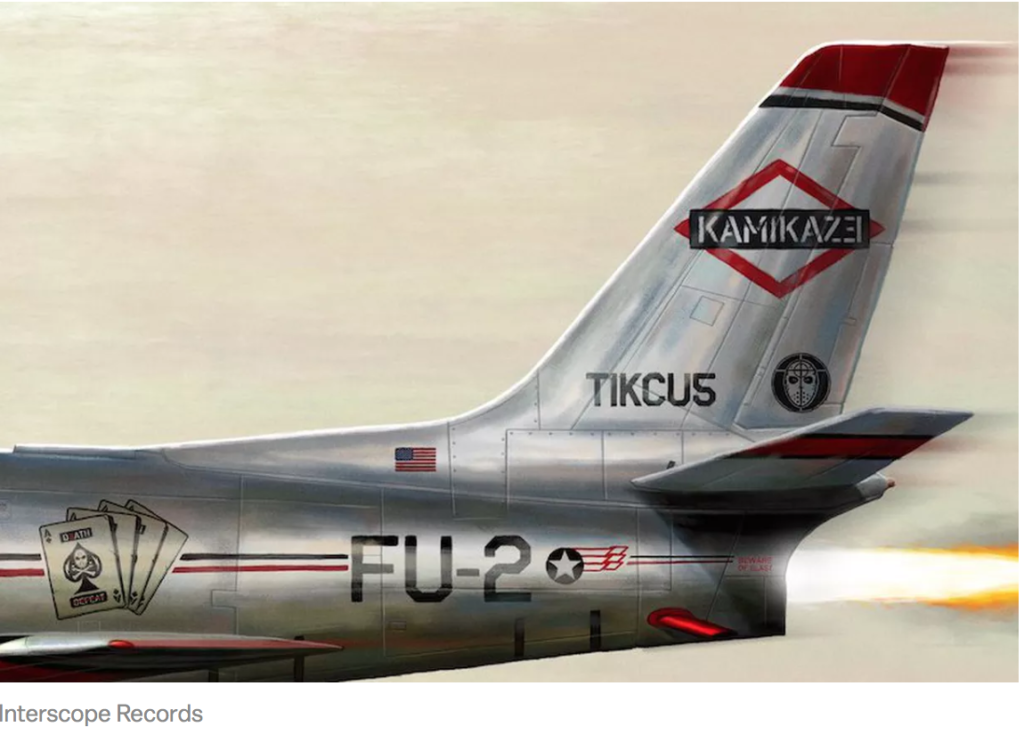 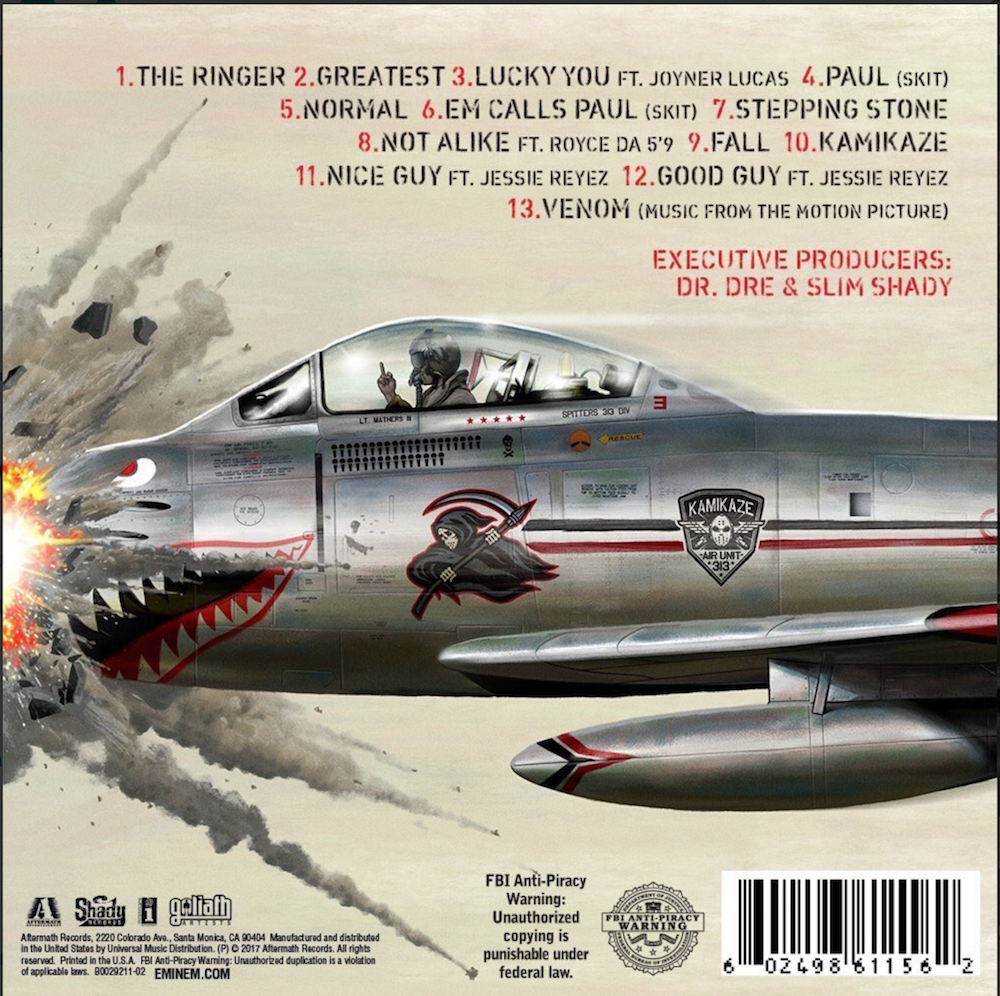 At 12:00 am on Friday morning, Eminem casually tweeted out a link to a surprise new album, Kamikaze, and set the late-night internet on fire.

The 13-track album, streamable on Apple and Spotify, is the rapper’s first release since his 2017 LP Revival. Produced by Eminem and Dr. Dre, it pays homage to the classic Beastie Boys album License to Ill and features collaborations with Joyner Lucas, Jessie Reyez, Royce da 5’9, and Bon Iver’s Justin Vernon.

More importantly, it features Eminem in full-on old-school mode, dropping a litany of classic Marshall Mathers verses. It’s an occasionally uneven album, but it’s full of fire and full of Eminem’s always-impressive skill. It also reminds us, as few Eminem moments have lately, why so many hip-hop fans believe he’s the GOAT.

This might sound surprising after the negative reception to Revival, which drew the worst critical response of Eminem’s career despite sporting flashy collabs with the likes of Beyoncé and Ed Sheeran. But on Kamikaze, Eminem is clearly back on his bullshit, and so much better for it.

Throughout Kamikaze, Eminem takes aim at the stagnant feel of recent rap and its purveyors.

From the very first track, “The Ringer” — which opens with a brutal litany of rap disses before seamlessly shifting to the rapper’s well-established anti-Trump rage — we get Eminem at his self-aggrandizing, self-deprecating, dizzyingly self-assured best. Along with savaging a bunch of people (“Lil Pump, Lil Xan, imitate Lil Wayne,”) he devotes a whole verse to professing himself mystified by recent rap trends, à la “Gucci Gang,” with their “subpar bars” and “choppy flow.”

Em makes the point again and again that he’ll never stint us of a good rhyme or a well-crafted run-on lyric. In stellar tracks like “Lucky You” (his utterly fire collab with Joyner), “Not Alike,” and “Fall,” he asserts his confidence that he still has a place in rap — and that rap desperately needs him.

He does this musically, especially through the use of trap beats (“Not Alike”) and musical references to other artists. By using duplicated clips and structural mimicry, he summons musical memories of Kendrick Lamar, Drake, and Migos to ironically illustrate how overly copied their work has become, and how lazy it is to simply lay down a weak verse over someone else’s song structure.

Lyrically, so many people get dissed on Kamikaze that it’s easier to talk about who doesn’t. Naturally, Em’s longtime mentor Dr. Dre, who co-produced, is safe, as are his album collaborators. But “if you ain’t Joyner, Kendrick or [J.] Cole or Sean then you’re a goner,” he promises. By the time the album ends, pretty much everyone is dead:

Eminem is big mad. After being eviscerated by the media for his insipid release Revival in 2017, Shady returned to the drawing board and concocted a potent comeback project in Kamikaze.

Check out the five things we learned on our first listen to Eminem’s 10th studio album Kamikaze below.

Em Goes For the Gusto On “The Ringer”

On opening track “The Ringer,” Shady unleashes a salvo of shots targeting hapless Mumble rappers. Em openly expresses his disdain for the dearth of MCs in the culture, and has no issue slashing through the hearts of Lil Pump and Lil Yachty with his searing verse. Not only does Em recycle Pump’s “Gucci Gang” delivery during his five-minute heater, he dropkicks the youngsters with staggering blows.

“Get this fuckin’ audio out my Audi yo, adios/I can see why people like Lil Yachty, but not me though/Not even dissin’, it just ain’t for me/All I am simply is just an emcee,” says Em. It isn’t all bombs and grenades that’s being mercilessly chucked by Marshall and Co., though. He does share some love to some of his favorite MCs when he raps, “I’m gonna crumble you and I’ll take a number two/And dump on you if you ain’t Joyner/If you ain’t Kendrick or Cole or Sean then you’re a goner/I’m ’bout to bring it to anyone in this bitch who want it Em.”

Eminem Has a Fresh Eye For Young Talent

Instead of digging into his star-studded rolodex, Em keeps it light on the features this time around. On Revival, Em swung for the fences and nabbed cameos from the likes of Beyonce, Alicia Keys, Ed Sheeran and more. For Kamikaze, Em recruits budding songbird Jessie Reyez for two tracks (“Nice Guy” and “Good Guy”) while snagging Joyner Lucas for a blistering lyrical exhibition on “Lucky One.”

In recent years, Em has openly expressed his appreciation for Joyner Lucas as a burgeoning wordsmith. During his talk with Interview Magazine, Em named Lucas as one of his favorite MCs in hip-hop. Not only does Lucas deliver a gripping verse showcasing his dexterity on the mic, he manages to keep up with the Rap God himself.

Tay-Keith is most definitely in the running for rap producer of the year after shelling out three top five records on the Hot 100, including Bloc Boy JB’s “Look Alive,” Drake’s “Nonstop” and Travis Scott’s “Sicko Mode.” Eminem has always been known to keep his eyes and ears peeled to the streets, so when Tay-Keith’s drop on “Not Alike” rang out, mayhem ensued on social media. Not only does Shady flex his lyrical brilliance on the bombastic trap beat, he tags in his long-time buddy Royce Da 5’9′ to tango alongside him.

D-12 Will Never Be a Thing Again

Em’s candor isn’t at all limited, as he openly discusses his now-defunct group D-12 on his standout track “Stepping Stone.” Shady’s brainchild saw commercial success when they notched a double-platinum album with their 2001 debut album Devil’s Night. Their scintillating debut fueled consumer fervor when they returned in 2004 with their sophomore project D12 World. The group clinched their second No. 1 album on the Billboard 200, but later encountered several struggles later on during their tenure together.

In 2006, Eminem’s best friend, Proof, was murdered. His death caused the group to spiral and lose their bond as a unit. On “Stepping Stone,” Em addresses the peaks and valleys of D-12 and why it was such a burden on him early on his career.

“The death of Doody broke us in two/We were thrown for a loop, ain’t none of us know what to do/And at the time I was goin’ through my own struggles too/So I wasn’t in no condition to be coachin’ us through/Everyone tried to go solo, really nobody blew/I was hopin’ they do so I ain’t have to shoulder the group,” Em raps.

Later, towards the end of the track, Em closes the chapter on his beloved group and says that D-12 is a thing of the past: “Done all we possibly can, I know we kept our hopes up/But the longer we spend livin’ this lie that we live/The less is left for closure, so let’s let this go/It’s not goodbye to our friendship, but D12 is over.”