We Will Never Surrender by Mick J Clark for Extinction Rebellion
January 17, 2020 admin

Eminem announced the album on Twitter by sharing its cover art and writing, “It’s your funeral…” The rapper also wrote that the album was inspired by filmmaker Alfred Hitchcock, which is reflected in the LP title and photo used in the album art he tweeted. The interlude “Alfred” features a clip from Hitchcock introducing his sole album release, 1958’s Music to Be Murdered By. 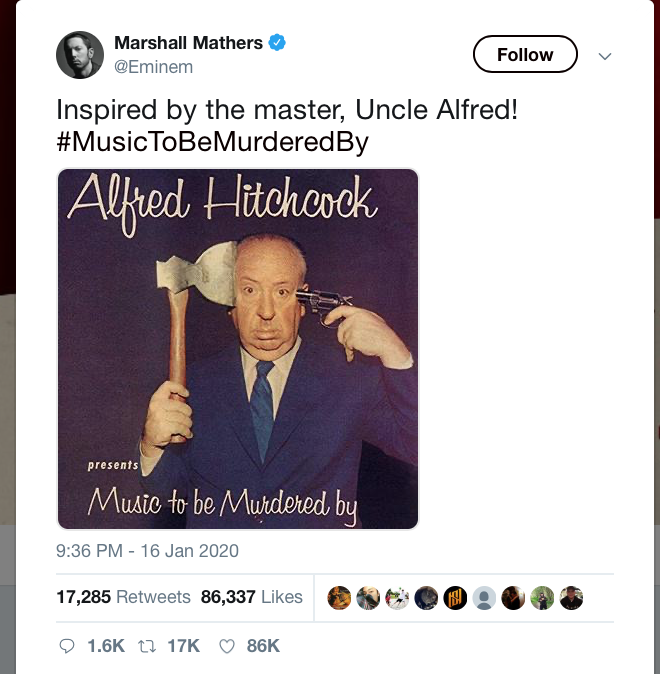 Eminem surprise-released his 11th album on midnight Thursday, ending weeks of rumors and speculation on when the rapper would unveil the follow-up to 2018’s Kamikaze.

To accompany the album’s release, the rapper unveiled the anti-gun violence video for “Darkness”. What starts off as a song about loneliness and the crushing weight of solitude builds to a tale of a man murdering people with guns. The clip channels the 2017 Route 91 Harvest music festival shooting in Las Vegas, where a gunman opened fire from his hotel room and killed 58 people before killing himself.

WHEN WILL THIS END?  WHEN ENOUGH PEOPLE CARE.
Please contact or visit the following organizations to find out how you can help or learn more about putting an end to senseless gun violence, or to help survivors and their families.